What is an HVLS Fan? – An Intro to the Basics 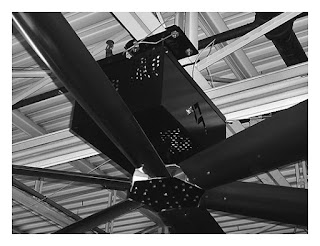 Size
These big fans normally range in size from 8ft to 24ft in diameter.  Some patented designs enable smaller size fans - like 9ft, 12ft, and 15ft - to give the same performance of larger fans.

Motors
In spite of their size, due to their slow speed (see RPM below) they usually only require 1 to 3 HP motors to provide the necessary performance.  I won’t go into the physics of these machines, but suffice it to say by moving slowly, with their large size, they have enough power to do what they are designed to do.  As fan speed increases, the power needed increases exponentially; so slow and steady is the energy efficient way to go.  Most manufacturers provide designs which can be used with multiple power sources.

RPM (or Fan Speed)
The smaller size fans run 100+ RPM.  The largest ones typically run up to 48 RPM, sometimes even up to 60 RPM.  They also have variable speeds - usually controlled with variable frequency drives (VFD) so often are run at much slower speeds.  Some manufacturers try to keep fan blade maximum tip speeds by size constant but the need and benefit of this is not particularly clear.

Gear Reduction
Most manufacturers use gear boxes/gear reducers to convert motor speeds of up to 1850 or even 3500 RPM down to the lower fan speeds.  Some manufacturers use gear-less motors - often referred to as pancake motors - but by their very nature they generally cannot match the power and performance of HVLS Fans with gear reducers, particularly in the larger sizes, and where industrial/heavy-duty performance capabilities are required.

Blade Shape and Material
Some of the best known manufacturers use extruded aluminum blades which are uniform in shape throughout their length. The shapes range from airfoils based on aviation wing design intended to maximize lift of flight, but which may limit their effectiveness as fan blades, particularly when run in reverse to blow air upwards.  Some manufacturers use blade shapes which enable upward and downward air movement equally effectively.  Some others shape their blades for varying purposes and make them using varying methods and materials other than extruded aluminum (like using composite materials in a mold) where the design is intended to provide equally effective air movement - up and down - while limiting tip speed turbulence as well as dead spots under the fan.

Air Movement Up/Down - Forward/Reverse
As noted in blade shape, some fans are designed to solely blow air downwards.  Some are designed that way but are allowed to run in reverse - to blow air up - albeit less effectively.  Some are specifically designed to blow air down or up just as effectively (I believe it is a critical feature to maximize air mixing in a facility, which is important for heat destratification and other objectives - more on these concepts in future blogs).

Fan Controls
Some fans are controlled by individual fan controllers or wall boxes, others may offer control units to run multiple fans.  Some use low voltage controls, some have high voltage powering the fan controls, particularly if there is a variable frequency drive (VFD) in the wall box.  Others have "smart" software to determine how fans run based on manual to fully automatic fan control made possible using electronic sensors in the fan and in the wall box.

Blade Pitch
The measurement of blade pitch varies depending on the design of blade shape, and intended performance (including up vs. downward airflow).  Early brands have used low drag/maximum lift of aircraft wings, which tend to use a low pitch angle.  Others use higher pitch angles for broader airflow impact as well as greater air volumes moved and mixed.  And one manufacturer has patented variable pitch capability to allow for flexibility in air flow depending on floor/facility conditions as well as efficient use of electricity at desired speeds.

Performance
Performance can be measured in many ways as follows -

As noted, this is just a brief overview of the basic aspects of HVLS Fans.  Manufacturers use different approaches to get the desired performance effects.  In all cases, HVLS Fans have proven themselves to be very effective and energy efficient air mixers and movers over large areas.