Heat Destratification: Why it's important to blow air upward with HVLS fans


One of the biggest reasons to use HVLS fans in colder seasons is to achieve heat destratification.  I am not sure you can find that word in the dictionary, but it sure is a good one to understand if you are spending any money heating a large facility.

In its essence, heat destratification captures heated air that has risen towards the ceiling and gets it back down to floor level.  It also helps ensure that the hot air that rises doesn’t get wasted by escaping through the ceiling and roof.

HVLS fans accomplish this by moving and mixing the air masses within a space such that the temperatures are more uniform at all height levels.  In doing so thermostats set at certain temperatures to control heaters get bathed in the mixed and warmer (and more comfortable) air such that they call on heating systems to run less frequently.  With heaters running less frequently big savings can be realized.

But what’s the best way to destratify the air in a space?

Some HVLS fans are designed to just blow the air downwards in an air column that purportedly then moves along the floor and circulates back upwards when it hits a wall or the air flow created by another fan.  Often these fans have blades with airfoil shapes that the manufacturer has design from model airplanes, sailplanes, truck spoilers and other such shapes where the original foil design was for maximum flight lift with least air resistance.  Most of these fans operate in one direction to blow the air down.

Some do have reverse capability, but as aviators often say, you can’t fly a plane backwards, or in the case of these HVLS fan solutions the air movement effectiveness of the airfoil is considerably diminished when operating backwards and upside down.

I am a firm believer that blowing air upwards for heat destratification is the better way to go.  The US Patent Office and the MIT trained engineers I work with seem to agree.

Obviously one avoids a chilling breeze that HVLS fans typically cause when blowing downwards.  A simple comfort benefit can be realized by mixing the masses of hot air without feeling it happening.

More importantly, particularly in high ceilinged spaces, blowing upwards gets the heated strata of air captured toward the ceiling more effectively than trying to pull it down.  The objective is to “destratify” the different “strata” of stacked air up there.  I often liken it to old submarine movies where the skipper takes the sub below the thermocline to hide from the enemy.  Hot air strata are sort of like that – layers of heated air with their own characteristics that can be difficult to get at and mix. Thus much of the heated air can be more likely to be wasted if not moved and mixed by pushing air upwards.


And in really big spaces where you are trying to move and mix lots of air it can be advantageous to alternate blowing upwards and downwards for more complete mixing of warm air. 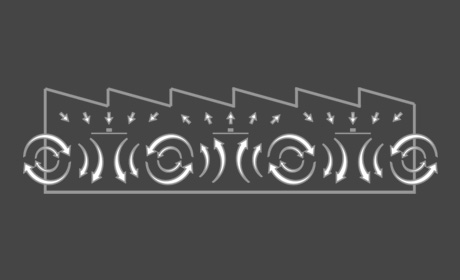 So I think it is a better feature of HVLS fans that can blow air upwards, and even more so if they are designed to be just as effective blowing up and down.

Oh, and while at it, rather than having a narrow column of air trying to do the work of air mixing as can be seen with older fan designs, I also believe using greater pitch enables broader areas of impact and larger volumes of air moved and mixed for the same effort. Picture a larger area of impact from a conical dispersal of air versus a straight down column of air. But that’s for a future post.

Clearly HVLS fans are ideal for year round comfort and energy savings and efficiency.  Having upward air flow capability designed in, maximum effect can be more readily realized.  It’s the smarter way to destratify.

When can you enjoy the benefits of HVLS Fans? 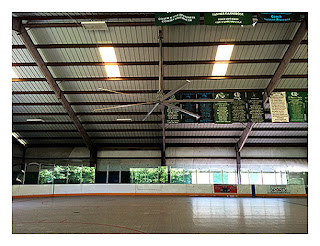 It’s simple.  Use them all year long.  No matter where you are, no matter what season, no matter what climate, no matter what kind of facility you have.  They will serve you well providing improved and enhanced comfort, productivity, IAQ, and energy savings and efficiency day in and day out.

The benefits HVLS fans provide are numerous.  First of all, HVLS fans are air movement systems, not just cooling systems.  They move and mix lots of air.  As a result of the masses of air they move they are very effective in aiding cooling, heating (through heat de-stratification) and ventilation.  They also mix bad and noxious air, including humid air, reducing damage and waste (and disease) due to unwanted moisture, and creating a healthier atmosphere to breathe.  As a side benefit they help eliminate birds and bugs and all the environmental damages they cause.  And with all the energy they can save you can argue they ultimately make the world a better and safer place!

As you learn more about HVLS fans, you will find the major benefits of their quiet and gentle airflow are -
As they get the better and more comfortable air in more places, they result in productivity increases while reducing energy usage.  Greater productivity using fewer energy resources is one of the best ways to “go green” - with a bonus of more comfortable and healthier work environments.

Simply put, in summary, HVLS fans with their gentle and non-disruptive air movement create an evaporative cooling effect of 6 to 14 degrees or more in hot environments.  In cold environments they de-stratify hot air rising to ceilings, enhancing comfort, and, more importantly, reducing heat loss and related energy costs by 20% to 80%.  Similar savings are experienced as a supplement to A/C.  As a bonus, their highly effective air mixing and ventilation result in drier, cleaner, fresher, and healthier air.  Energy and operating costs go down while productivity goes up.  Payback periods are short (often less than a year - look for more on energy and related cost savings in a future blog) and ROI very high due to significantly reduced operating costs and elimination of energy waste and loss.

Improve comfort while saving money 365 days a year - how can you go wrong?