HVLS fans: Why you should not assume anything


You know what they say. If you assume something you are only making an a## out of u and me.

That old adage rings true in the HVLS fan industry.

Let me give you three examples.

Years ago when I was running the other guys we had a customer that was a nationwide big box retail chain.  They had two 140,000 square foot distribution centers in the northeast that were nearly identical.  They ran multiple shifts in these DC’s.  Each one had 7 big HVLS fans.

One of the facilities ran the fans 24/7 365 days a year.  And loved the summer cooling and winter comfort.  The facility guy didn’t see the heating bills but knew from his boss they also enjoyed significant winter heat savings.

Well we assumed the same was happening at the other facility with the same basic climate and operating conditions.  But lo and behold, we learned they only ran the fans during the heat of the day in the summer.  It was eye opening for us to think that place had not been getting the most out of their fans.  And so a quick tutorial was in order.

In another example of this old axiom, when we first came out with our new variable pitch fan, I was amazed at the number of folks who would ask if they had to go up and change the pitch manually.  We assumed it was obvious in our literature and our design that the pitch was adjustable from the low voltage wall box while the fan was running.  So in future discussions with potential customers we needed to adjust our own “pitch” to be sure the customer understood the features available. 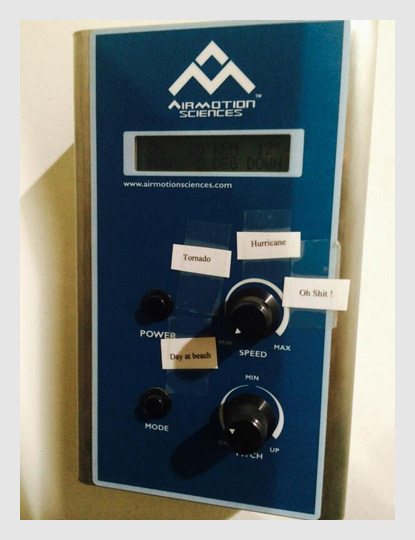 My favorite example from which we really learned the perils of making assumptions was a customer in the northeast who had put two of our fans in a 30,000 square foot high bay helicopter repair hangar.  We went to visit after they had had the fans as while.  It was late winter and a cold day. The place had ceiling heaters and poorly insulated walls and bay doors – perfect for HVLS fans and their heat destratification benefits.

The facility guy told us that he was tracking heat cost savings on the order of 25% from the prior year, which he thought was great.  We actually expected higher savings…

We also met the head mechanic who told us how great the fans were in the summer and how they really made a difference in the winter where it was warm and much more comfortable at the concrete floor level but also no longer hot and sweaty when he was up working on top of a chopper.

Clearly they were enjoying the benefits of heat destratification. 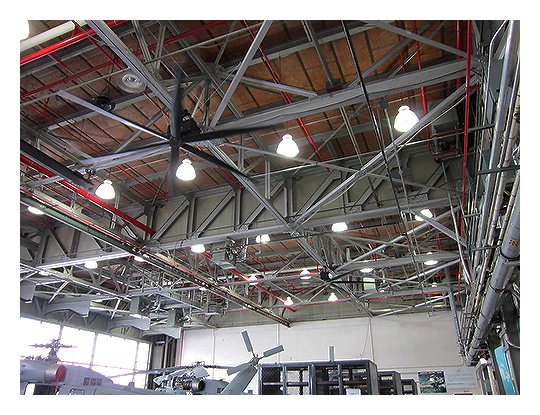 But then we took a look at the wall boxes where we saw there was still quite a bit of difference in temperature between the floor and the ceiling, which didn’t make a lot of sense.  Then we noticed they were running the fans at low pitch angles.  I changed the pitch to 20 degrees and within minutes we saw the difference in temperature going down quickly.  They were now going to find even greater savings and comfort by making the best use of their variable pitch fans.

So boy oh boy, here we were dealing with helicopter folks – of all people we expected they would truly understand and appreciate how the variable pitch of our fan works.  Yet they needed to be educated further.  We had assumed too much.

The moral of these stories is that we want to be sure folks take full advantage of the features and benefits of their HVLS fans.  We can’t just assume they know how.