There are basically two ways to reduce energy consumption and greenhouse gases: either Alternative/Renewable Energy or Energy Efficient solutions.  The latter has an additional benefit of reduced energy costs and often numerous other benefits.  Not sure about Renewables.

In fact I would argue if you look closely, Renewables make little or no economic sense - at least in the short term. Of course argument can be made as to long term impacts that no doubt have financial and other benefits e.g. cleaner air, stemming the impact of climate change etc.

But Renewables are not currently economically possible without substantial taxpayer and/or ratepayer subsidy.  And in reality they are, and are projected to continue to be, a small fraction of the supply of usable energy.

I recently attended a Massachusetts energy conference.  Speakers included the Lieutenant Governor and the State Energy Secretary.  It was a great event, I learned a lot, and it was clear the Commonwealth of Massachusetts, like so many other states, is serious about reducing energy use and greenhouse gases.

One of the speakers worked for one of the larger utilities.  Her topic was a layman’s breakdown of a typical consumer utility bill.  Sure the major components were fuel and power transmission (including amortization of the substantial capital costs as well as the administrative overhead).  But what really stood out was the breakdown of the pieces of the bill that went to subsidize the cost of Renewables, the cost of utility rebates, and the cost of state and local energy saving grants and other initiatives.

All of these things added up to 23% of the total bill!

Take Windmills.  They are engineering marvels (maybe not to the birds).  And they do generate electricity when the wind is blowing (but not when blowing too much…).

Yet just imagine the real cost without subsidy. For the blades and the power unit, and the shipping, and the site purchase and prep, and the installation, and the future repairs whether under warranty or not, and the legal costs of issues that always seem to surface.


Let me describe three windmill scenarios with which I am familiar.

One involves a windmill that was installed near where a friend lives in another state. In the first year its main gearbox failed.  So to fix it they had to gain access (after installation) by acquiring land rights and building a roadway to get to it so they could replace the bus-sized gearbox.  I asked my friend who paid and he said it was under warranty.  Well I have no doubt substantial warranty costs are built into the purchase cost.

Another example is my local municipality put one in.  It was a big deal. Plenty of back patting press.  But in reality it took a lot of DPW and other municipal leadership time and resources to get it done. Plus lots of legal costs to try to address various concerns, some of which are yet to be resolved.  Sure it offsets the town’s electric costs when it is running (it has been down a lot).  But in the meantime while folks were dealing with this the local roads have been going to pot.

My last example is I used travel to Scandinavia and Europe where windmill farms have been operating for many years in the energy resource challenged parts of the world.  Those governments put lots of financial resources into making those farms feasible. Where do you think those resources came from.  All I can say is have you ever paid for a gallon of gas over there? Or even a beer?

Don Quixote may be a big fan of these big fan-like things, but I don’t think the real payback for these will occur in my lifetime.

Sure under the right conditions and the right structure, and especially if the capability for storage of the energy generated can occur, these too can be a great source of renewable energy.

But even with a finance/accounting MBA and a CPA, I have yet to figure out the economic benefits and related attractiveness of payback periods without significant subsidy of some sort.

Having served on a local decision making board or two I have had the opportunity to look very closely at the economics of several solar installation opportunities.  In all cases the payback periods were many years.  And that was ignoring the fact that whatever was going to be installed would likely be obsolete within a few short years.  Also ignoring what would be involved with future panel replacement including any facility issues like roof replacement/repair. Ratepayer and taxpayer subsidy was the only way it would work.

Then there are the low hanging fruit of energy efficiency initiative like lighting replacement, smarter thermostats, VFDs on equipment, usage monitoring and smoothing, and other smart efforts. Usually done thanks to utility rebates and other financial grants and incentives.

So where am I going with all this? Simple.

HVLS fans are smarter than alternative and renewable energy sources.

I believe the smartest and most economically feasible way to reduce energy use and greenhouse gas emissions is by installing HVLS fans. They are truly the low hanging fruit in the energy saving world.

Whether it’s in new facilities or as retrofits in facilities that already have other solutions that will either be used less or made more effective.

Sure there are upfront costs – which by comparison are relatively very low.  And there are often utility incentives available (thanks to somebody else paying).

But in reality, the economics are there with or without any incentives.  The payback periods are very short.  And the ongoing financial benefits from lower energy use coupled with the comfort and many other benefits realized will enhance the bottom line and the work environment for many years to come.

Somebody pays – but with HVLS fans the secret is it is the utility that pays via less revenue!

When I exhibit at energy conferences among all the latest energy saving and usually taxpayer or ratepayer subsidized widgets, I tell people we have the greenest thing in the room that can go to work saving energy costs and providing benefits right away.

We came up with the following rendering that I think says it all: 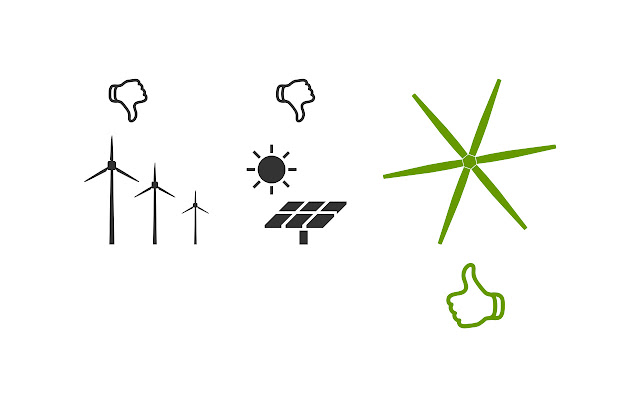 HVLS fans are the smartest way to go green.  Get comfort.   Increase productivity and safety.  Save lots of dough on energy bills.  All while making the world a better place!